How to Play Flam Accents

Flam Accents are comprised of three notes. The first note has an accent and a flam on it while the second and third notes are single stroke taps. Since Flam Accents are comprised of three notes, you'll frequently see them written in triplet form since triplets naturally have three notes in one beat. Please note that you can also see Flam Accents in eighth note, sixteenth note, quintuplet, and sixtuplet form. All that you're looking for to identify a Flam Accent is a three note grouping with an accent and flam on the first note followed by two single strokes with natural sticking. 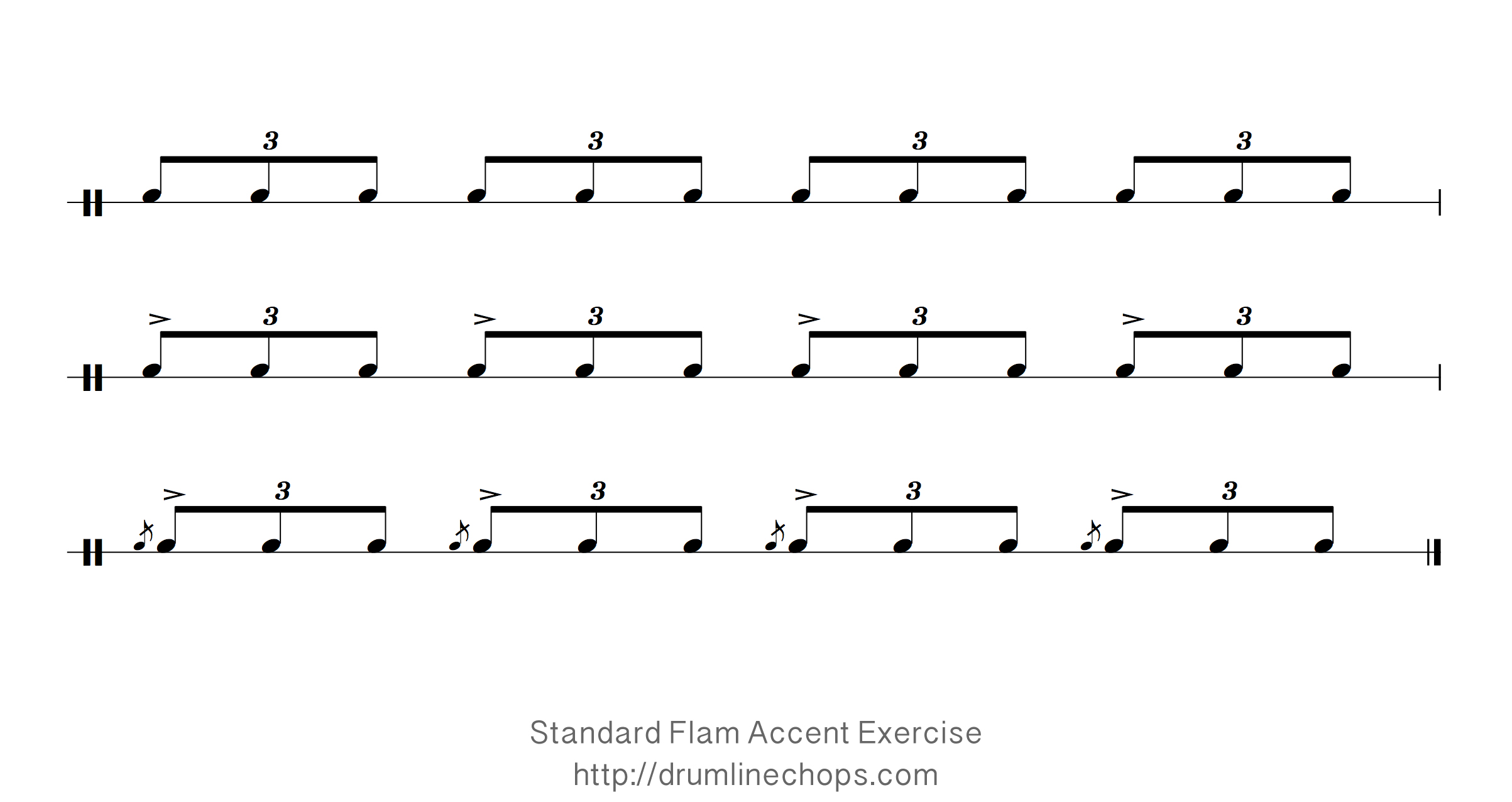 While you play this Flam Accent exercise, it is extremely important to focus on the underlying rhythm the entire time. The reason rudimental drummers make the #1 mistake so often is because they get caught up focusing on either the accent or the grace note. While they're important, the accent and grace note are just embellishments and will fall into place more naturally than most would think if you just concentrate on always playing the underlying rhythm accurately.

This exercise is quick to learn because it's only three measures long. Start by working on each measure individually. Repeat each measure however many times you need to feel comfortable with it. Ensure that you master the first measure before moving on to the second measure, and that you master the second measure before moving on to the third measure. Each measure sequentially builds on top of the previous measure so it's important you spend time working on each individual aspect of the rudiment. Once you can play all three measures comfortably with a consistent pulse, underlying rhythm, tone quality, and control, string all three of them together and play the entire exercise.

As always, start slow. Slow practice is an incredibly beneficial habit to develop and ensures that you give your brain an opportunity to really understand everything that is going on. In addition to that, slow practice also improves your ability to play at slow tempos which is an incredible asset for every rudimental drummer. After you get a feel for it and have mastered the exercise at a slow tempo, gradually speed it up over time. It's recommended to move up in increments of 2-5 beats per minute and to only move up 10 bpm a day. This method will provide you with plenty of repetitions at various speeds so that you can gain and understanding for what Flam Accents feel like at different tempos.

How to Play Flam Accents Conclusion

Flam Accents are very popular and important rudiments for every rudimental drummer to know. They are made up of groupings of three notes with an accent and a flam on the first note followed by two alternating single stroke taps. The number one mistake that rudimental drummers make when playing Flam Accents is focusing on the accent or the flam of the rudiment and letting the underlying rhythm become uneven. To avoid this, be sure to focus on the taps and underlying rhythm the entire time you play the Standard Flam Accent Exercise.

Create an account and get free drumline lessons, exercises, and routines that help you break through your glass ceiling and turbocharge your chops!

Pat McLaughlin is the founder of Drumline Chops.  He graduated from the University of North Texas with a degree in music education and is currently the percussion director at West Bloomfield High School.